THE VITAPHONE PROJECT was founded in 1991 and seeks out lost 16” soundtrack discs and mute film elements of 1926-30 sound-on-disk talkie shorts and features for restorations. To date, over 3500 disks have been found, and over 100 shorts and 10 features have been restored, in cooperation with UCLA, Warner Brothers, BFI, The Library Of Congress, and private collectors. Go to www.vitaphoneproject.com for the Project’s website. Contact co-founder Ron Hutchinson at ron@vitaphoneproject.com.

The next screening of restored Vitaphone shorts is at Film Forum in NYC on 7/20/10.

This year’s program offers a pretty eclectic mix of music and performers – hopefully something for everyone!

CARTOONS! – MY PAL PAUL (1930) and NO OTHER ONE (1936) –
Walter Lantz’s little-known follow-up to his color cartoon in THE KING OF JAZZ, recycling the movie’s songs. Then Hal Kemp & Skinnay Ennis (plus Wiffle Piffle) invite us to follow the bouncing ball!

GUS ARNHEIM & HIS ORCHESTRA (1927) – one of the earliest Vitaphone band shorts, catching this hot West Coast band a year before its first record date – pre-Russ Columbo and Bing Crosby! New Orleanian Ray Lopez is one of the trumpeters; future bandleader Jimmie Grier is on saxophone and sings in the vocal trio (he’s on the left). Notice how the banjoist switches to guitar and walks over to an off-screen microphone to play an obbligato to the vocal trio. They play “Sing Me a Baby Song” and “Who-oo? You-oo, That’s Who!”

LEO WATSON & THE SPIRITS OF RHYTHM (both 1941) – A Soundie by Eddie Cantor imitator Jackie Green – “Alabamy Bound” – and a number from the feature, SWEETHEART OF THE CAMPUS – “Tom, Tom, the Elevator Boy.” Leo Watson is prominently seen in both, along with guitarist Teddy Bunn and Wilbur & Douglas Daniels, plus bassist Wilson Myers.

WOODY HERMAN (1963) – Bill Chase’s beautiful arrangement of “A Taste of Honey,” with Chase on trumpet and Bobby Jones (I think) on tenor.

DISTRAXION (2007) – a funny little digital cartoon about the perils of “smooth jazz” in the workplace.

TOMMY DORSEY (1944) – two musical numbers that were cut from THRILL OF A ROMANCE. Bob Allen, Bonnie Lou Williams & the Sentimentalists sing “I Should Care” and the King Sisters vocalize “Please Don’t Say No.”

AL JOLSON (1930) – a two-color Technicolor clip from MAMMY – “Why Do They All Take the Night Boat to Albany?”

And that’s all, folks!

1)                 Vitaphone Billboard  (1936) – One of a series of one-reel Brooklyn filmed shorts in the “Big Time Vaudeville” series that presented multiple acts in a recreation of a mini-vaudeville program.  Featured here are The Keller Sisters & Lynch, best remembered as vocalists on the Jean Goldkette Victor 78 “Sunday”.

2)                 The Amphibian Band (1929) – a brief clip from a Fox Movietone newsreel. The studio sent their sound cameras all over the world to capture news as well as novelty performances like this.

4)                  Walt Roesner & The Capitolians (1929) – this is a New York-produced MGM Movietone short presenting the Capitol Theatre’s all star band. Look for Jimmy Dorsey, Rube Bloom, Miff Mole and Nat Brusilloff among many other top musicians.

8)                 Ted Lewis in ‘The Happiness Remedy” (1931) – another Paramount Astoria short, in which we glimpse Eddie Lang and hear the band perform “Homemade Sunshine” as they recorded that year on Columbia.

9)                 Gentlemen of Polish (1934) – here is a long unseen MGM short starring Vitaphone favorites Shaw & Lee. Of particular interest is the studio’s use of scenes and rehearsal footage cut from their concurrent feature “Hollywood Party”. 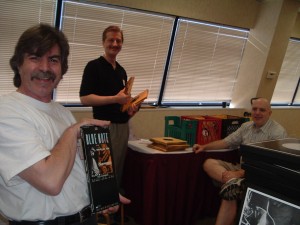 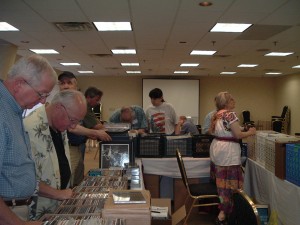 Digging through the stacks 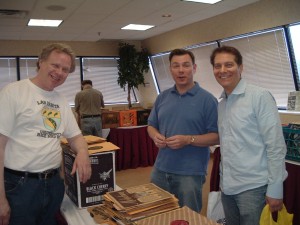 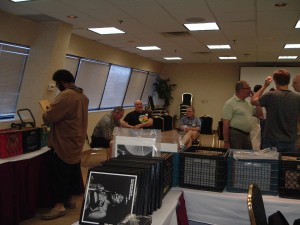 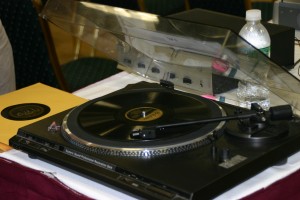 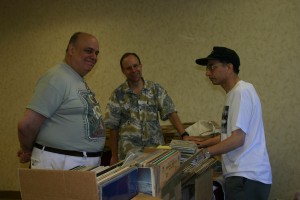 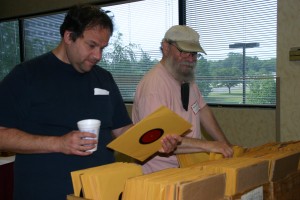 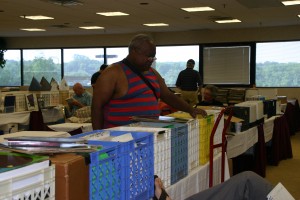 Ray Drummond browsing thru the stacks!

We welcome you to the Jazz Record Collector’s Bash Blog. We encourage you to post your comments about record collecting and related subjects. Send us your favorite sites and collecting anecdotes.

GREAT NEWS!  The NJ Annual Jazz Record Collector’s Bash is alive & well and makes its grand return on Thurs.-Sat., Oct. 27-29, 2022. So mark your calendars now! Once again, The Bash will take place at the Hilton Garden Inn, 50 Raritan Center Pkwy, in Edison, NJ. After overseeing The Bash for a dozen years, Artie Zimmerman has handed over the mantle to David Weiner and his partner, Barry Miller. Jim Eigo remains the media contact. We will update you soon with more details about table and room reservations and what special presentations are in store.